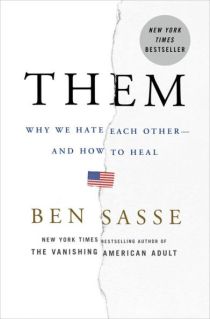 I finished reading Ben Sasse‘s book Them: Why We Hate Each Other – And How to Heal this past Thursday.  I picked up this book because one of my research interests is the process of othering or creating The Other.

The author, Ben Sasse, is  the newwest Senator from NEbraska, having just been elected in 2014.  Sasse frames his argument for how we’ve gotten to the current state of othering within an s discussion of loneliness as a central condition and a need for tribes to surround ourselves.  He points out one of the biggest problems resulting in othering is a result is the current state of politics.

The book discusses this concept of politics with the introduction one of my favorite new words:  polititainment. Sasse uses this term to describe how the talking heads on tv, particularly on Fox News and MSNBC, create a false political dichotomy of extreme rights and extreme lefts that cannot work together and/or meet in the middle, which exists solely for personal profit and fame of the talking heads.

Part of his solution offering is to look at things in a new way.  On the surface, this is a good offering.  However, as his initial discussion involves the issue of loneliness, the discussion deviation into the area of discussing how people need to adapt to a new and changing sharing economy and the reduction of personal ownership appears to create more potential for othering and separating people rather than bringing them together.

Freelance artist, writer, and military veteran in St Louis with degrees in English and Education. View all posts by C.W. Reynolds

This site uses Akismet to reduce spam. Learn how your comment data is processed.

Things I Write About

Bite-sized business and economic news for our generation

Discovering the joy of art

The Power of Story

The B&N Sci-Fi and Fantasy Blog

Feel the world through my words

Wine reviews so good, you can almost "taste it" !

Live life in a livable environment.

Holiday Season 2021- Let us all be grateful for the simple things.Wishing everyone safe travels over the next few days. Windows From Heaven

We Believe in God,Heaven, Angels,and JESUS is Coming back soon!

The Terror of OCD
Happiness Inn

mastery of my own cipher

This blog is about sharing inspiration and motivation stories based on real life, imaginary life based on current affairs and creativity

Searching for the 'better half' within

Being vegetarian and eating greens and salads out is always a risk, it s hard to be 100% sure all you eat is absolutely safe, so take it twice a year to guarantee your body is free from unwanted organism